An exclusive opportunity to hear from one of Vancouver’s most prominent entrepreneurs.

We know it’s been a tough couple of weeks adjusting to the new normal. If you’re looking for something to do on Thursday evening while holed up at home, we’re hosting a free webinar with tech entrepreneur and author, Jeff Booth.

For more than 20 years, Jeff has been a visionary leader in the local technology sector, being named Person of the Year (2015) by the BC Technology Industry Association and one of the 100 Most Intriguing Entrepreneurs (2016) by Goldman Sachs. As the founding CEO of Vancouver-based e-commerce company BuildDirect, he led the company through the dot-com meltdown, the 2008 financial crisis, and many waves of technological disruption. In his new book, The Price of Tomorrow: Why Deflation is the Key to an Abundant Future, he offers a provocative thesis about the current state of our economies and what must happen to enable a brighter future in a technology-driven world.

**If you missed the event, here is a link to the webinar recording**

*The Zoom link is shared after registration. Join a few minutes early to ensure Zoom is working properly on your computer. 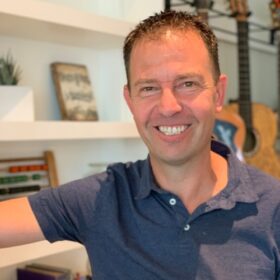 Jeff Booth is a visionary leader who has lived at the forefront of technology change for 20 years. He led BuildDirect, a technology company that aimed to simplify the building industry, for nearly two decades through the dot-com meltdown, the 2008 financial crisis, and many waves of technological disruption.

Jeff has been featured in Forbes, TechCrunch, Inc.com, The Globe and Mail, BNN, Fast Company, Entrepreneur, Bloomberg, TIME, and The Wall Street Journal. In 2015, he was named BC Technology Industry Association’s (BCTIA) Person of the Year, and in 2016 Goldman Sachs named him among its 100 Most Intriguing Entrepreneurs. He is a Founding Partner of OtioLabs, Co-Founder of addyinvest.com and NocNoc, and serves on the boards of Terramera, Cubic Farms, LlamaZOO, Synthiam and the Richmond Hospital Foundation as well as numerous advisory boards. He has been a Young Presidents Organization member since 2004. For the last 3 years, Jeff has been actively involved with UBC Sauder as a Founding Fellow at CDL-West (Creative Destruction Lab), mentoring many promising technology start-ups from UBC, across Canada and internationally.